The Phil & Teds Dot is back with a new 2015 model and we couldn’t wait to take it for a spin. This buggy is all about being compact (as with all the previous Dot models) and is designed to squeeze through tight spaces and allow a parent with two children to nip around town with ease. The Dot is renowned for being superslim, at only 59cm wide yet with a full size seat! 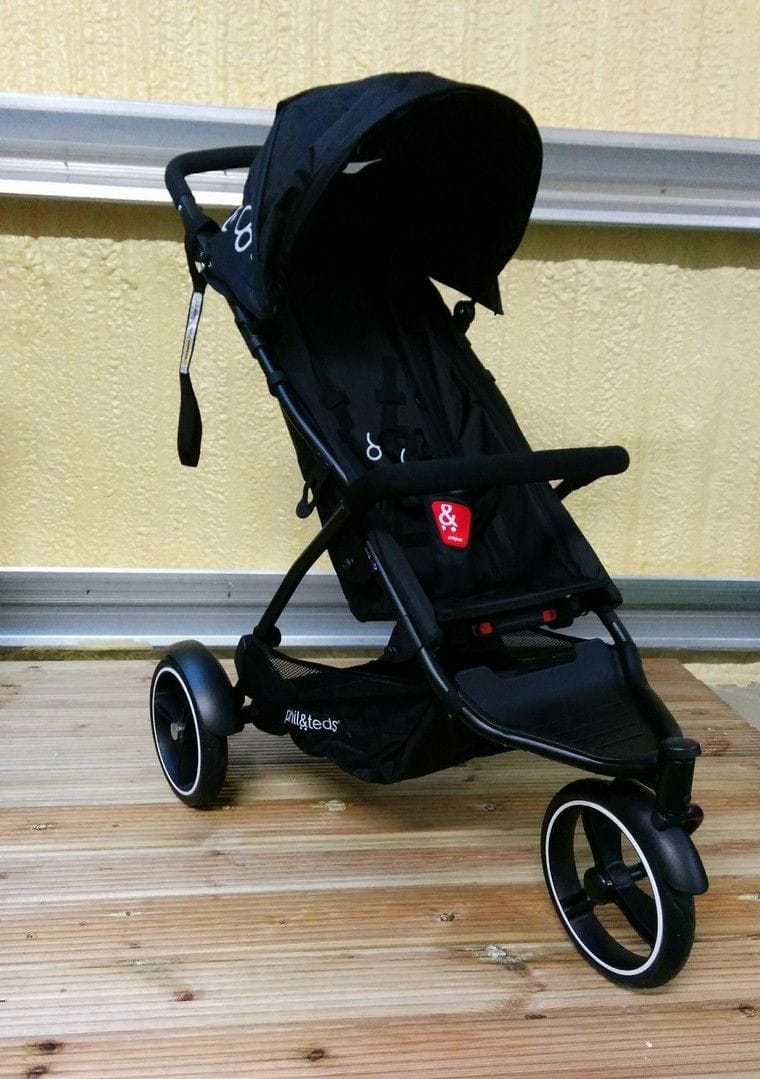 The Phil & Teds Dot has been a popular choice for some time and now the Phil & Teds Dot 2015 is on the market and only being sold as a double inline buggy even though the price point hasn’t increased. We don’t think it can get much better – including the Double Kit as standard means great value and allows the Dot 2015 to offer something for new or expanding families.

Suitable from newborn to 5 years, the Phil & Teds Dot 2015 has a compact fast fold, is inline ready with double kit included and is superslim, making public transport a breeze! If versatility is key for your family and you live a busy urban life then this could certainly be the buggy for you. 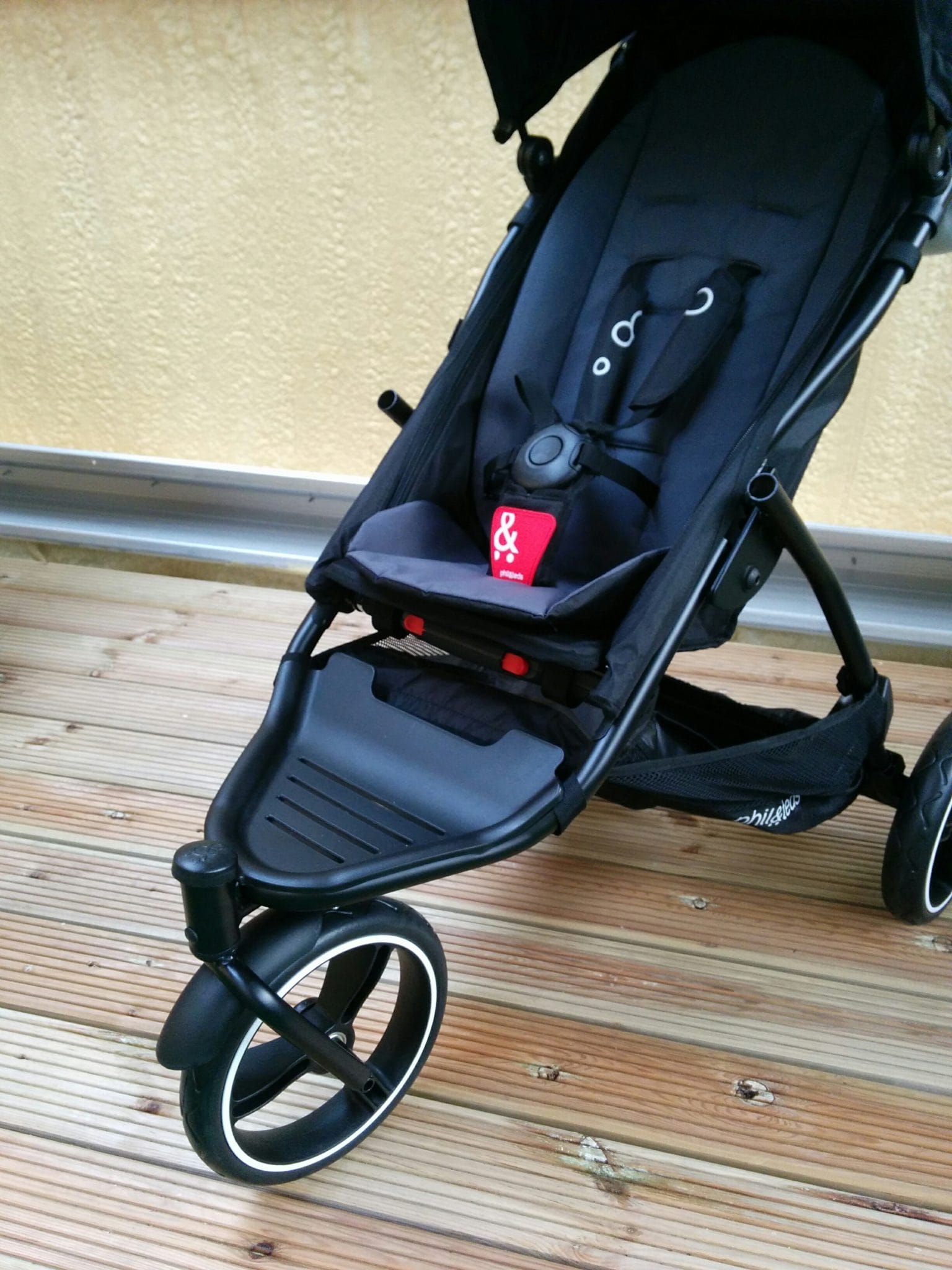 Out of the Box

We love finding a stroller that is super easy to assemble when you get it out of the box and the Phil & Teds Dot 2015 certainly delivered on this front. To get it up and away as a single buggy we only had to follow the following simple steps;

Folding a buggy with children in your arms or around your feet can be complicated business but the Phil & Teds Dot 2015 has a compact one-hand fast fold. At the base of the seat, above the footplate is a bar with a red lever on the top, simply push this to one side and the seat will be able to lean backward. 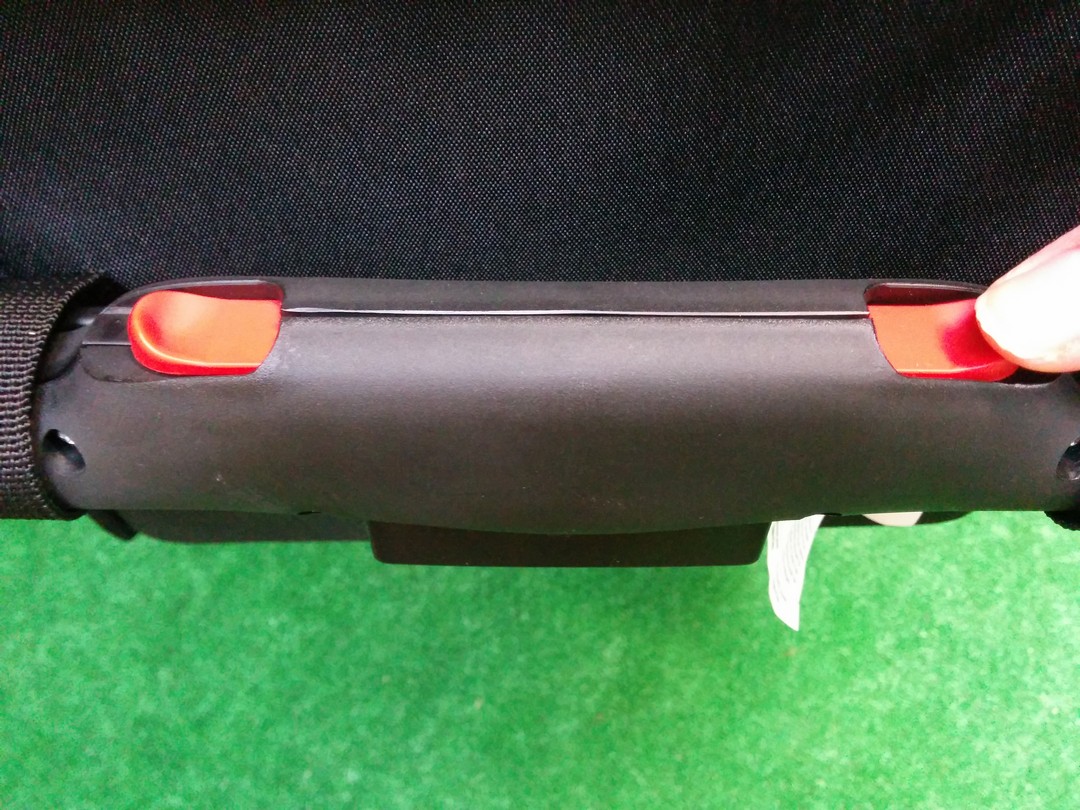 The next step is to push in the large black button on the underside of this bar (it’s hard to miss and easy to grab even if you’re grappling with a baby in your arms) and the entire buggy folds. It’s that simple and the autolock will keep everything in place until you’re ready to go again! 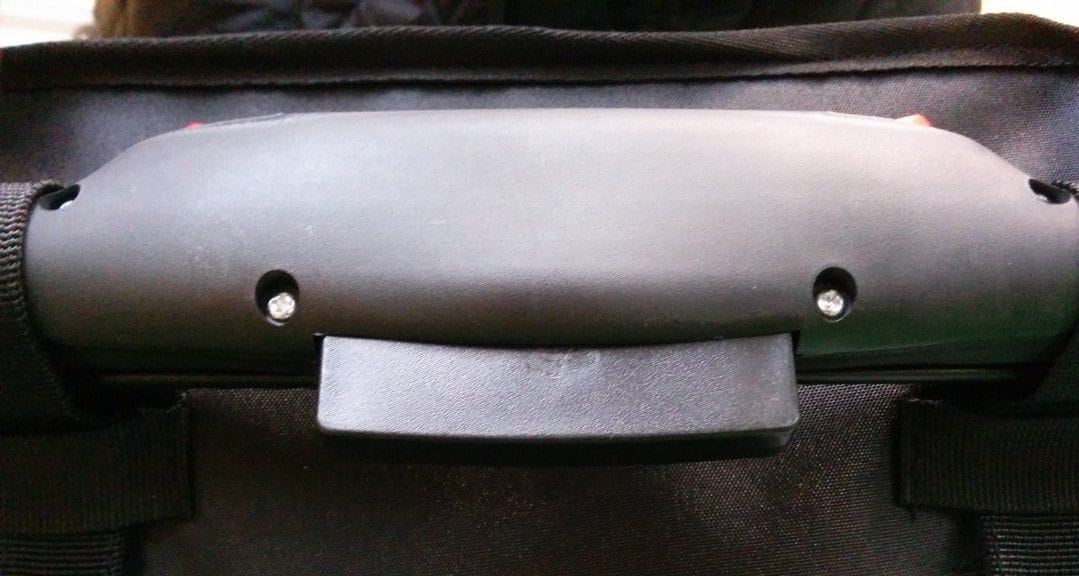 Despite its slimline nature, the Phil & Teds Dot 2015 manages to boast one of the tallest seats available on the market. This is great innovation from Phil & Teds because if you’re using this buggy with a toddler and a tiny one in tow (as we were) then the main seat has all the room you could need for your older child. 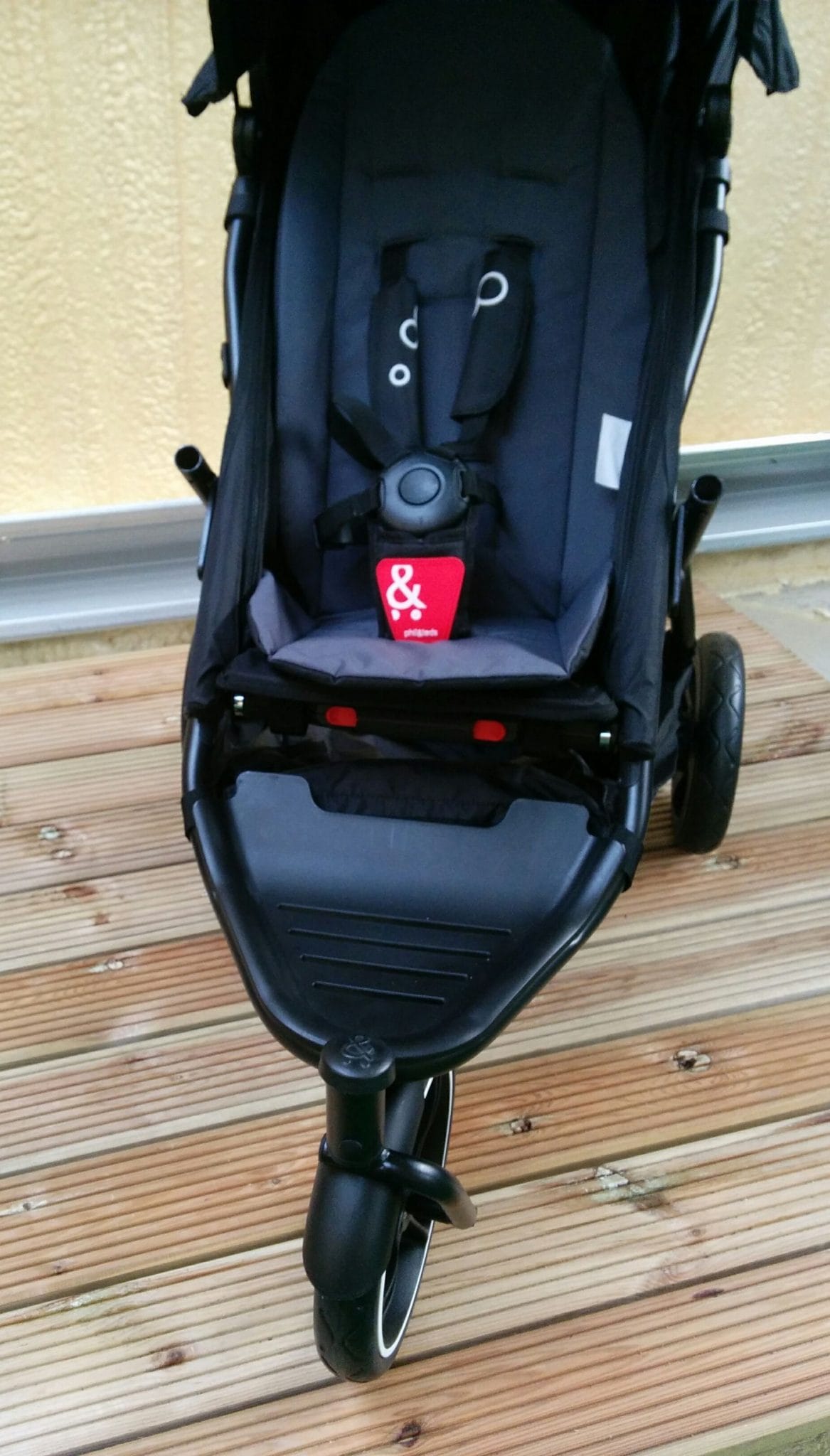 All Phil & Teds inline buggies feature a 5-point safety harness and of course the Dot 2015 is no exception. This has their classic mechanism where you press the button in the middle of the harness and all of the sections have to be individually reloaded. Adjustable shoulder heights are also featured by utilising the slots on the seat liner with three available heights to grow with your child. 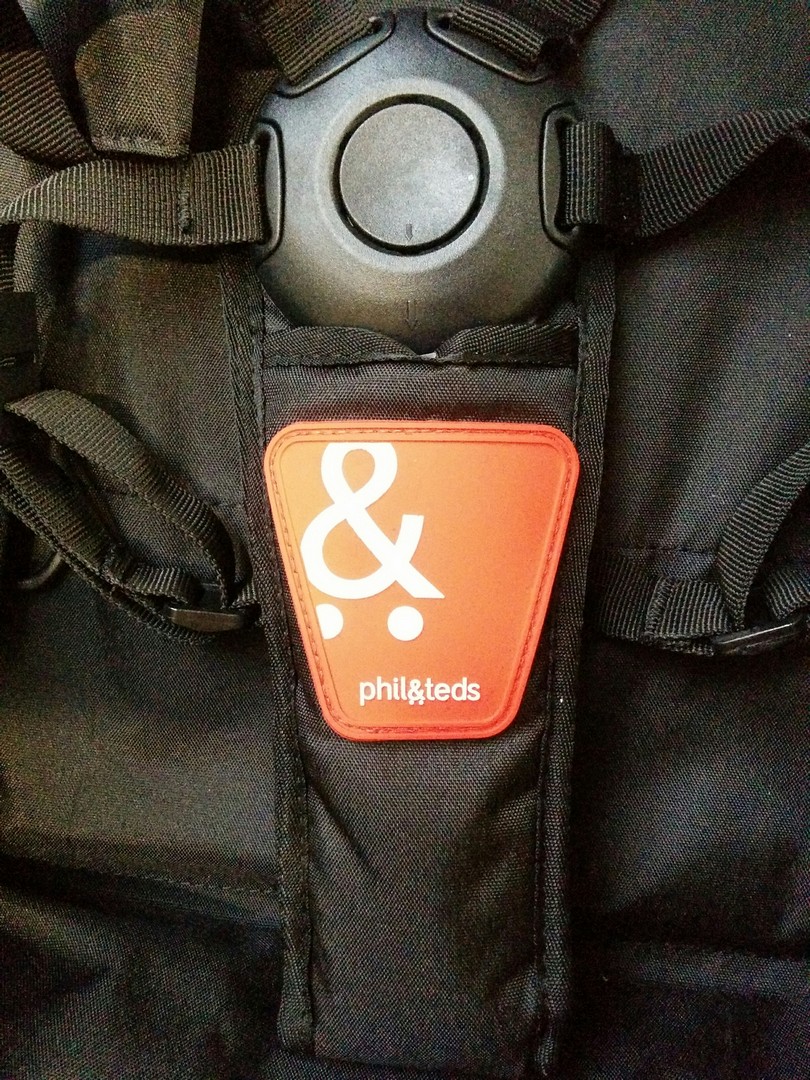 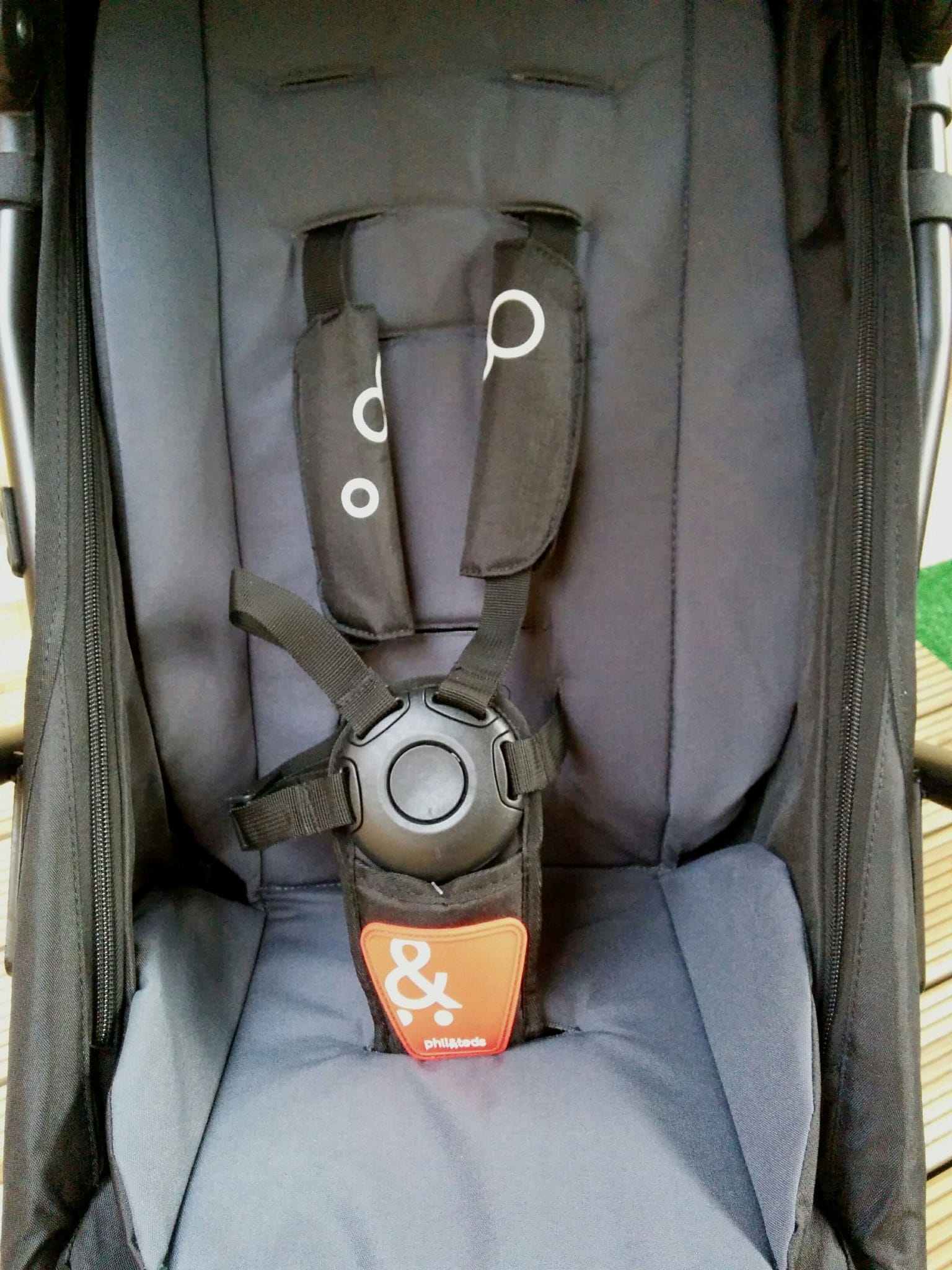 We all know that cleaning up after children is all part and parcel of a parent’s day and we love that the Phil & Teds Dot 2015 is wipe clean so that we can easily keep on top of any spillages or mucky hands. Features like this make the Phil & Teds strollers such a practical and functional choice whilst also being stylish too!

The Dot 2015 has the classic inline style and comes in 2 colour options; chilli (a vibrant red) and graphite (a slate grey). The stroller itself is mostly black in terms of the frame, handles, wheels and seat unit and it is the seat liners which come with the pushchair as standard which offer the pop of colour, as well as providing the comfort and support needed for your little ones. We kept the Graphite cover on the main seat but couldn’t resist getting the Cushy Ride Liner for the Double Kit in bright pink as this was the seat for our little lady! 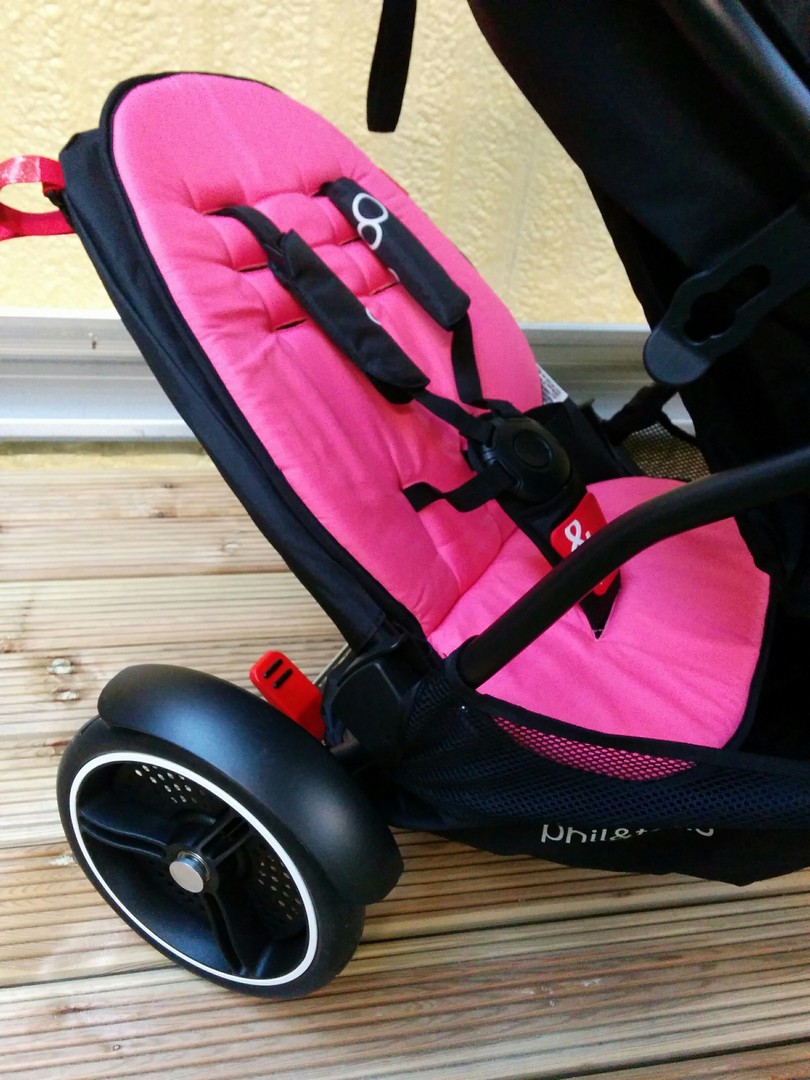 As the Phil & Teds Dot 2015 can be used from newborn there are also recline and lie-flat modes available on the seat unit by simply undoing the strap on the back of the seat and undoing the zips down each side of the chair. 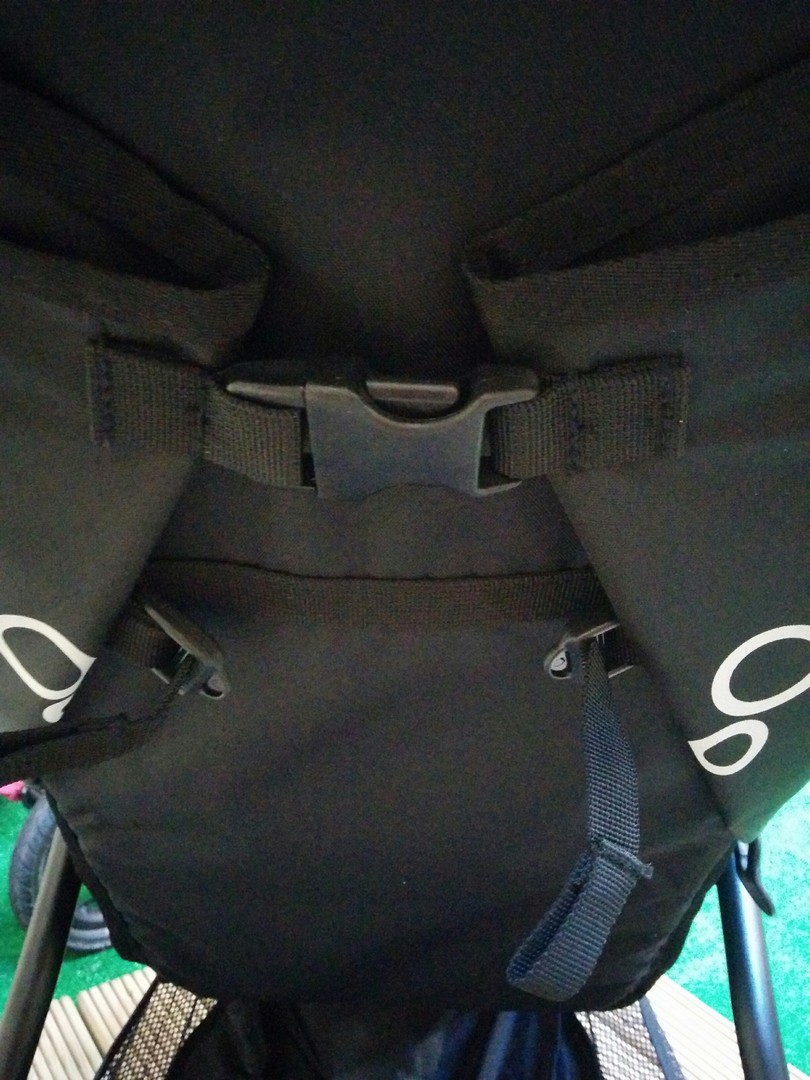 The Dot 2015 coming with a double kit as standard means great value for money and this inclusion makes life easier whether you have a second child now or if you simply want versatility for the future. To fit the double kit in the standard inline position is no hassle as it simply clicks into place with the handy adaptors and pops onto the frame at the back of buggy next to the underseat storage basket, locking off into place with the silver pins. The double kit can also be fitted on front of seat for extra versatility. 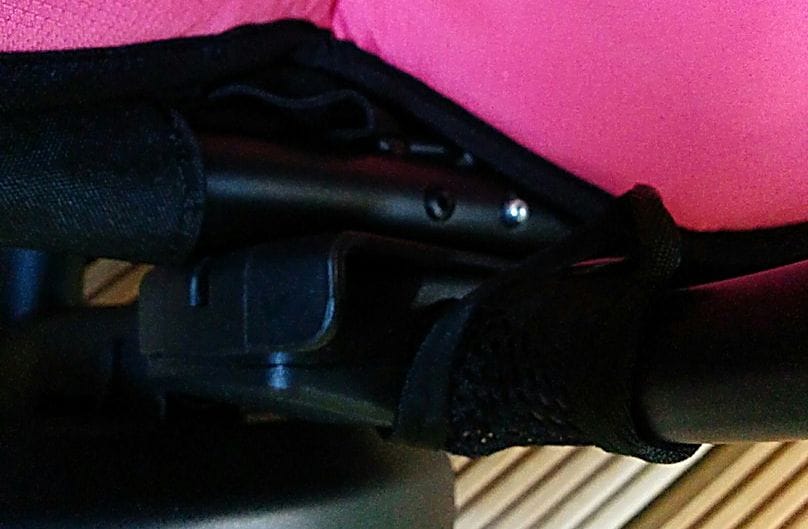 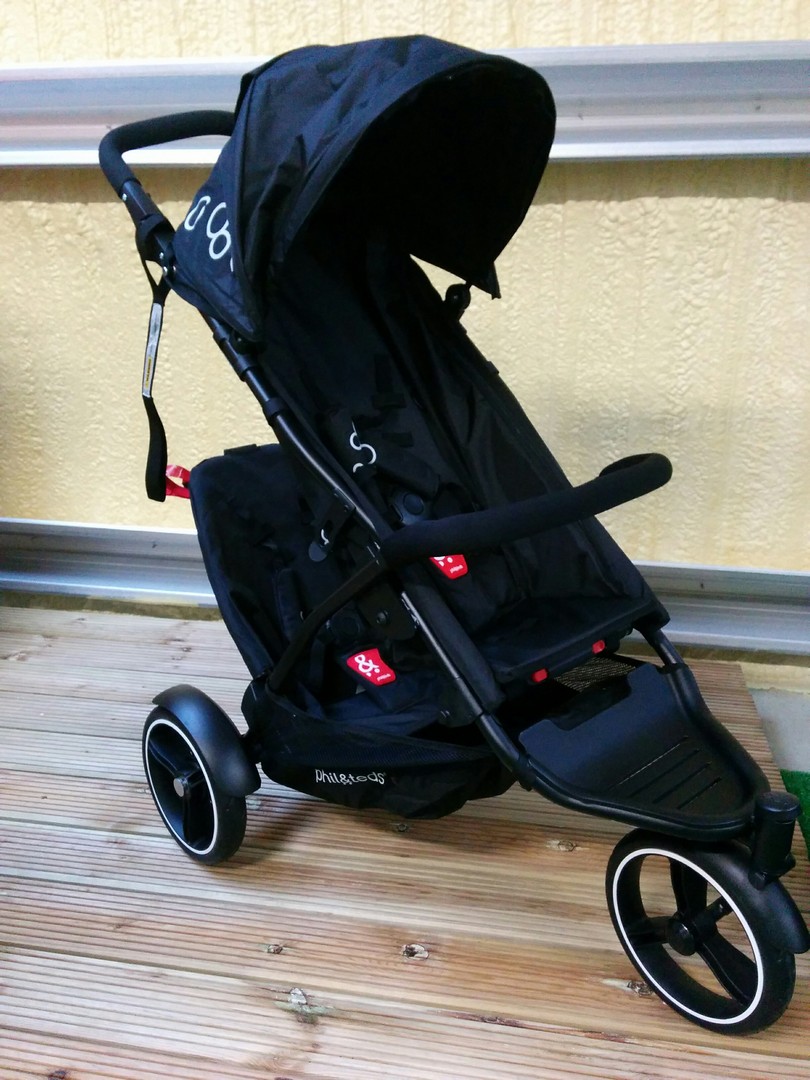 The sun canopy comes separate in the box but easily attaches onto the stroller. Clip the sun canopy onto the side bars of the frame and attach near the handle by popping the elasticated fabric around the silver catches on either side of the frame. 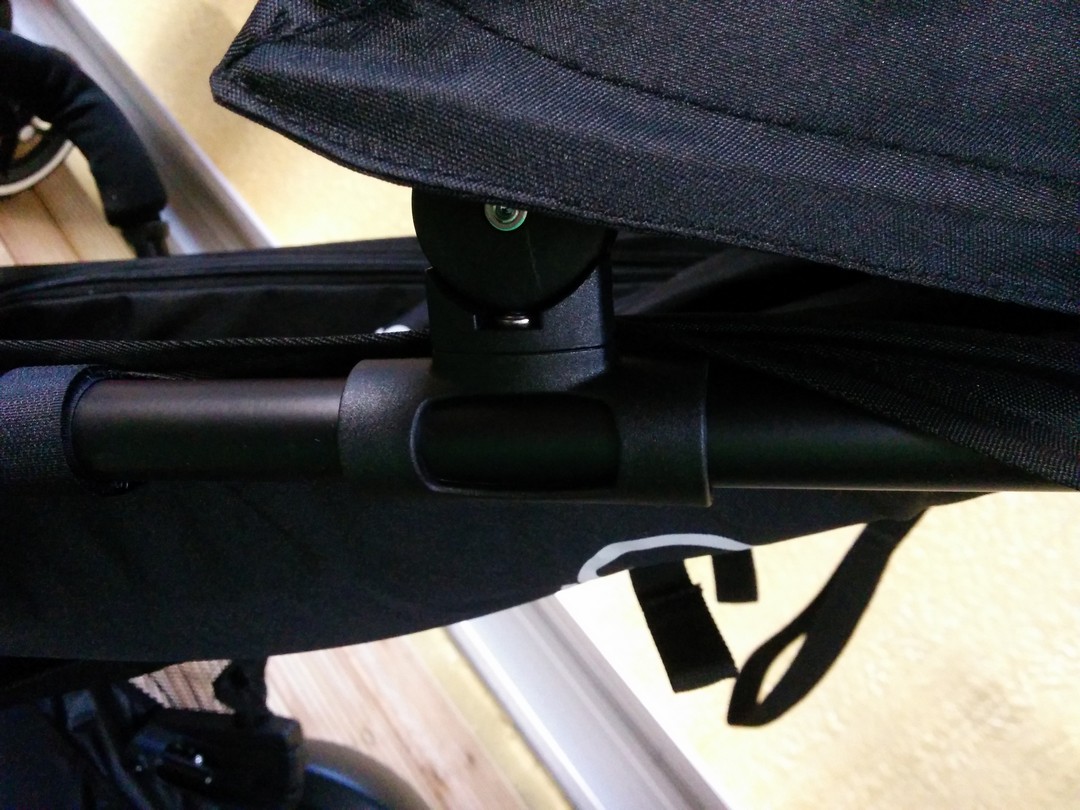 With a flip out visor offering 50+ UPF sun protection, the sun canopy is a great size to keep the sun at bay. There’s a handy peekaboo window too, so that you can check on your little one while out on the go. The sun canopy also adds to the look and feel to the buggy adding some extra style – no matter your colour choice the sun canopy features a white ‘bubble’ design on the side which we love. 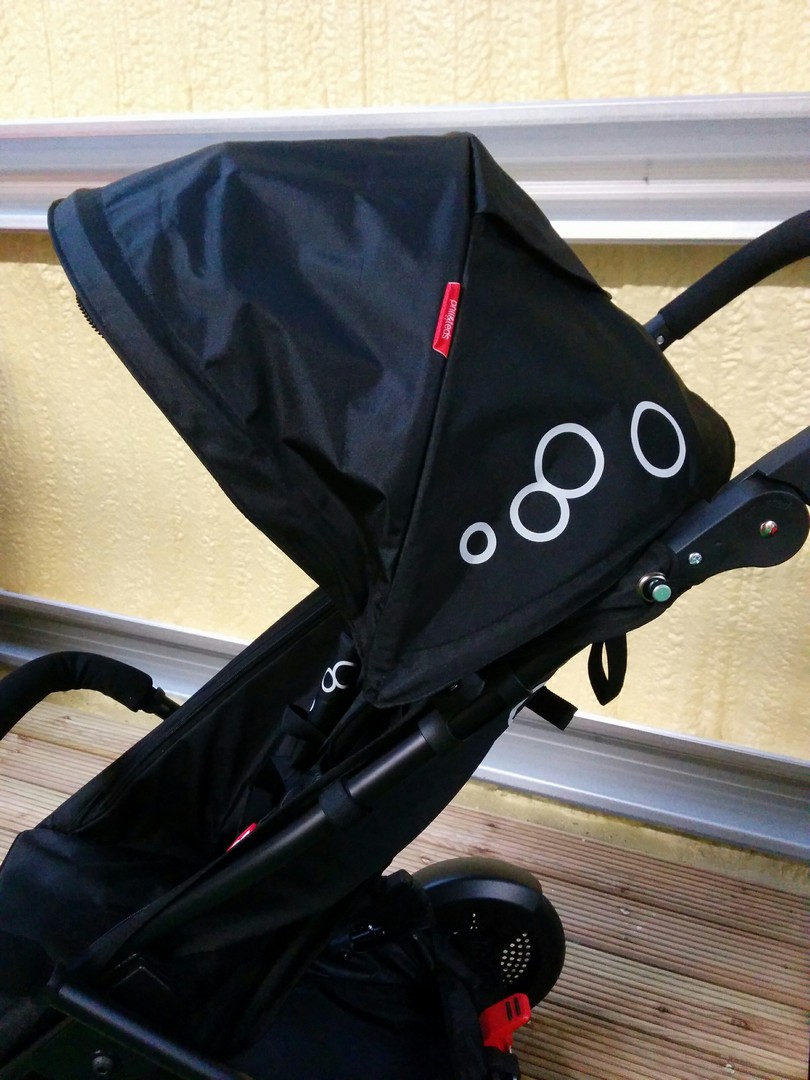 The ride is the most important factor to many parents and we think it’s vital to have a stroller that can cope well with the terrain you will experience. We think that the Dot 2015 handles superbly and this is no surprise as Phil & Teds pushchairs are designed to push with ease. The weight distribution on this model means that their stroller pops up kerbs with no trouble – even with two little ones on board.

With 10 inch puncture proof Aerotech tyres the Dot 2015 is the perfect choice around town and the lockable front swivel wheel makes rougher terrains even easier. All Phil & Teds inline buggies have a lockable swivel wheel and whilst this isn’t the buggy of choice for some serious off roading the lockable front wheel means bumpy pavements and cobblestones are no problem. 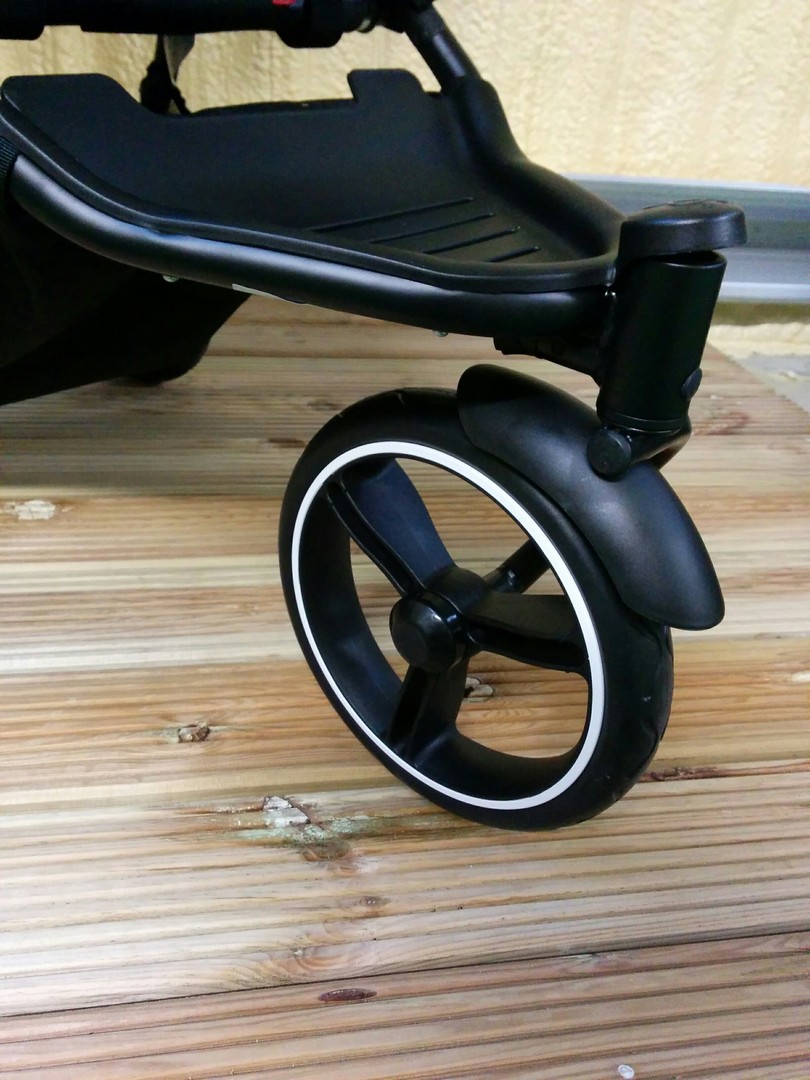 The handlebar is adjustable for different heights and you just need to push in the buttons on both sides and the handlebar tilts backward. The handlebar is also a soft foam material which means it’s comfy to hold when you’re off on some all-day adventures!

At the rear, the Dot 2015 also features a footbrake, located in between the rear wheels. It’s very simple to operate with an easy click on and off. 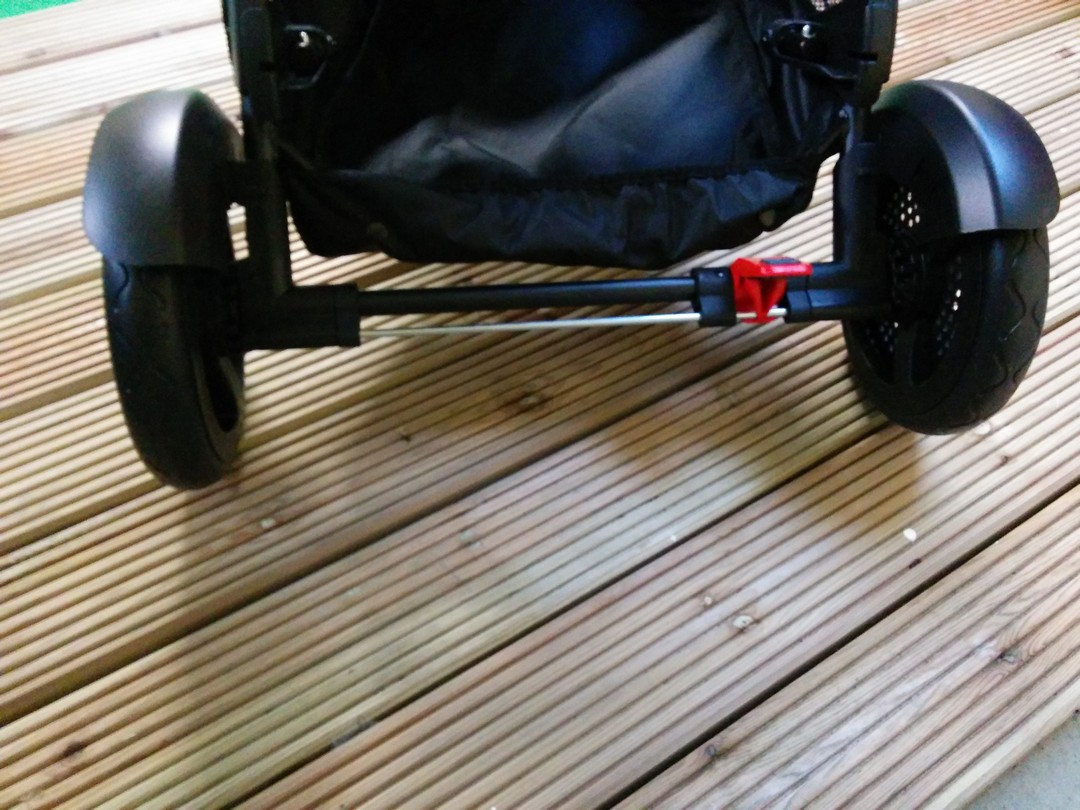 Underneath the seat is a large storage basket which can hold up to 5kg of baby essentials. 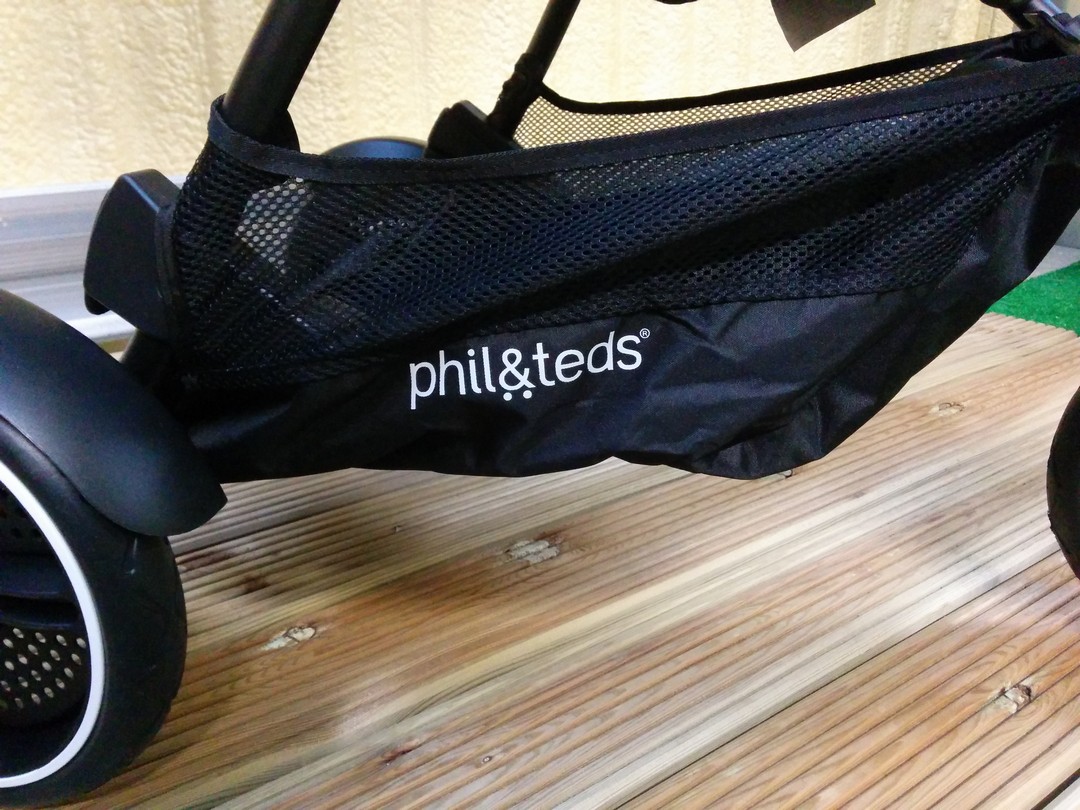 Phil & Teds aim to allow parents to adapt and survive and the Dot really sums this up. Even on such a compact stroller you can alter the set up by adding a car seat and even keep a double kit seat on the stroller at the same time. If you simply pick up the relevant adaptors (Phil & Teds Car Seat Adaptor – TS26 works for most major brands of car seat; Maxi-Cosi, Cybex, Phil & Teds) then you’ve got a ready-made travel system!

For different weather conditions a Dot 2015 Sun Cover and Dot 2015 Storm Cover come in handy when caught out in sunny or wet weather. These are essentials when travelling with your baby in the rain and the sun, both home and away. 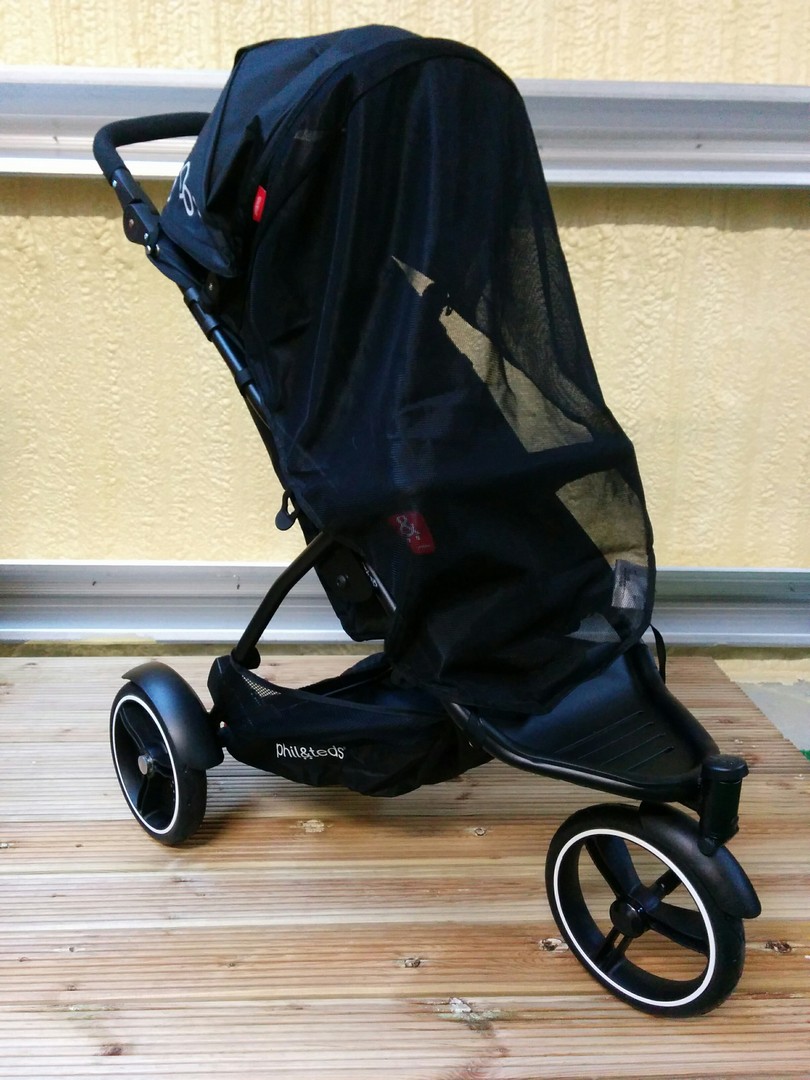 We got round the extra storage by picking up a Hang Bag which had enough space for all our essentials and easily clips over the stroller handle. We love the Hang Bag as it has storage spaces specifically designed for bottles, phones and keys! 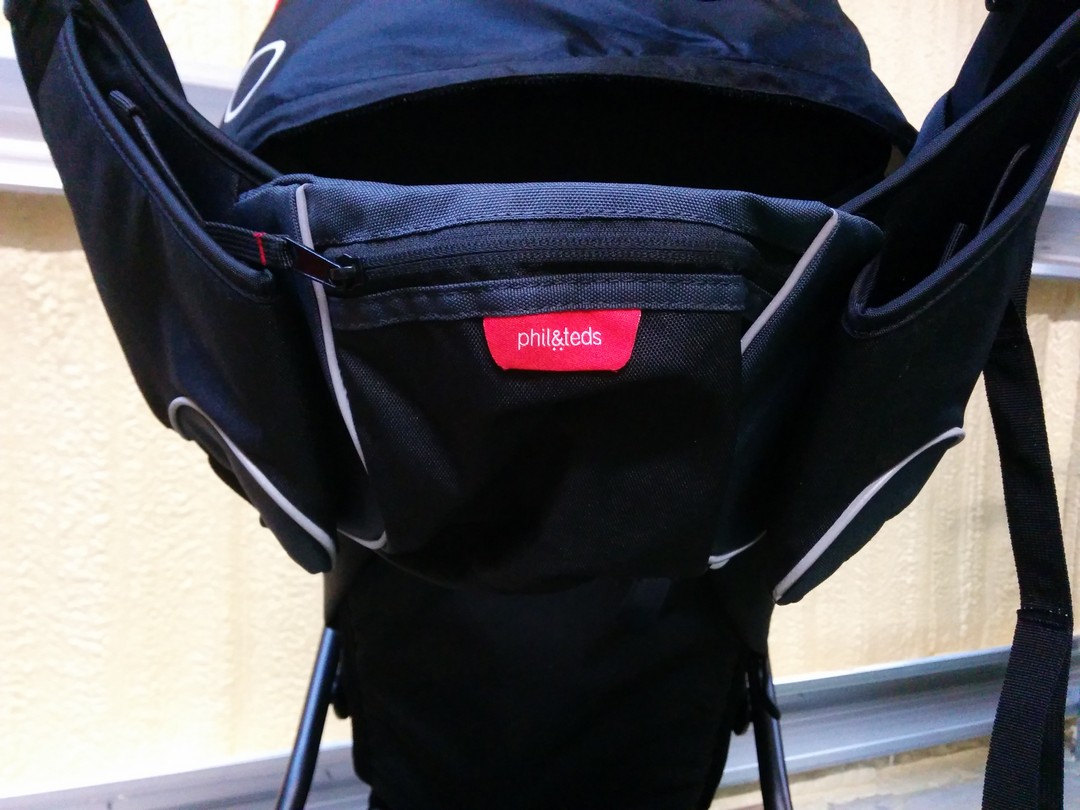